Simply jerking off a penis is done by moving the foreskin over the glans. This can be done backwards or forwards. Both the glans and the inside of the foreskin are sensitive. So two sensitive parts are moved over each other. The orgasm is ultimately mainly generated by the foreskin or also by the frenulum.

Young men in particular with a sensitive glance or a still narrow foreskin prefer to pull forward rather than backward. Another characteristic of this jerking phase is that the orgasm is still very explosive. A point is reached where there is no turning back. It can make it uncomfortable to be “caught” just at that point because cumming cannot be broken off anymore. It can make young men restless if they are not sure that someone could walk in any time and stop their orgasm. Which can be extra annoying because in addition finding out to how that penis works exactly, they have to start over and over again and often the preferences are not entirely certain.

As a penis has been jerked more often, everything becomes more spacious, lush and pleasant.

The jerking itself has two variants. Dry jerking and wet jerking. Dry jerking is more stroking the penis and glans parts. Wet jerking is done with oils and other means. It gives a deeper feeling, especially in the glans.

One trick is to press on the pelvic floor muscle behind the balls, along with the urethra muscle doing the sperm shooting. Exercising that only muscle, over which there is direct conscious control, also helps.

Also controlling the natural tendency to slow down or to stop completely when it gets better instead of jerking faster.

If something fits perfectly in a mouth, it is a penis. We instinctively learn it as a child. We put a thumb in our mouth and feel safer with it. We have to unlearn that later because the teeth can grow crooked, that’s how much we like it.

Mouths are extremely healthy for penises. In addition, a man’s penis is one of the most intimate places. Just as a woman is often afraid that a mouse will creep into her, a man is instinctively afraid that his penis will fall off. Sucking is a sign of confidence. It gives a sense of security, just like thumbs used to do as a child.

How you do it best is little described. Sometimes it is pretended to lick an ice cream. Or dare to lick. Then there is still a lot to learn about penises.

A mouth is moist, so sucking is closest to a wet jerkoff. However, the tongue is also soft, so it can hardly be make the pressure a finger can. However, the movement, the sucking, is very nice. It gets better when the foreskin is moved with it. A slight jerking motion, along with especially the tongue, not to mention the area of the frenulum is already very pleasant.

Another thing that penile nerves react to is penetration. Slowly taking a penis deeper in the mouth, especially if it is already very nice for the penis, is the best. In the meantime, don’t forget to caress the balls or massage them lightly.

There are men who can blow themselves. This is, of course, the very best way to learn to suck properly, because such men immediately feel what they are doing. Which part of the men can do it is vague. A penis does not always have to be longer than average. It is also possible at a late age. There are reports that almost every man can learn it.

It can hurt the back, and breathing is also difficult when you are blowing yourself. First of all, it is a lot of practice to make the back supple. Not to force anything. Then to find the right position. Upside down is easiest. Then try to touch the tip of the foreskin with the tongue. And so go a little further every day. At a certain point, the glans also can be touched. And after more practicing, half or the entire penis can go in and the balls can be licked. Likely, many men never learn because they find it too much trouble to practice. Or because they still find their own sperm dirty (very strange because you make it yourself and your body just makes new sperm from it).

A penis is of course perfectly built penetrate anywhere. There are extra nerves in a penis that make it feel extra nice when he enters somewhere. It gets even better if the foreskin can stay all the way back. The nerves that respond to penetration are inside the penis. In addition, if the penis itself is almost completely covered with extra sensitive foreskin that is backwards, that is the best way.

The designated spots are a vagina, a mouth or a bum. You can improvise between the thighs, breasts, or other places that look like something of a hole. 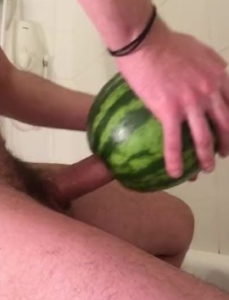 The designated places all have their usefulness and function. And are made for it. The whole anatomy is also very clear in this. No obligations but all possible. And if it happens, it won’t hurt.

In general, fucking only means penetrating a pussy. For a penis itself it makes little difference whether it is also a mouth or an bum. A mouth is a bit softer, a bum a bit tighter.

The idea that fucking is an “active” role is also relative. The person with the hole, any hole, can also use this to actively jerk a penis. And even determine whether that penis may already come or not. It is therefore still jerking but not by hand. The active role is then exactly the other way around. In this way, even a “passive” bum can actually be the boss in bed.